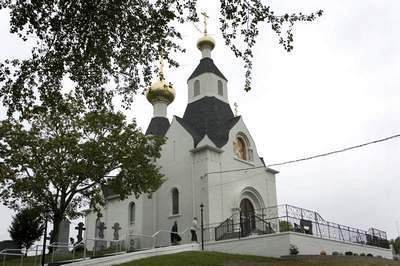 St. Mary’s Russian Orthodox Church, chartered on February 25, 1952, as the Nativity of the Holy Virgin Church, is today a most unique and beautiful representation of the “Moscow style”. It was built and consecrated with the blessing of His Eminence, Metropolitan LEONTY (Turkevich), and stands gracefully within the peaceful territory of the St. Vladimir’s Cemetery at 316 Cassville Road, Jackson, New Jersey.

St. Mary’s Parish is presently in the jurisdiction of the Orthodox Church in America, existing under its own Parish Statutes as adopted by the All-American Council in 1971.

St. Vladimir’s Russian Orthodox Cemetery was organized in 1939 by the ROVA Society. Through the efforts of the Ladies Auxiliary of the First Branch of Rova, St. Mary’s foundation and cornerstone were laid in 1940. The founding members of this Branch were: Lena Kostukevich, Pauline Swatikoff, E. Sitnikoff and L. Androschuk. By 1951 the new Chapel was completed. Father Peter Popoff, a New York priest, was appointed to serve the young parish and came to Jackson with his Matushka Tatiana. Following his arrival, the First Church Council was elected to serve the parish. His Eminence Metropolitan LEONTY dedicated St. Mary’s Church in 1955 and the chapel became officially recognized as St. Mary’s Russian Orthodox Church, Cassville, New Jersey. In 1958, with the help and devotion of the parish Sisterhood, a plot of land was purchased in order to build a parish home. This rectory was completed and blessed by Archbishop DIMITRY (Magan). In 1968 the Church was enlarged and blessed again.

On April 19, 1986, Father John Prokopiuk with Matushka Ludmila and their young daughter Anna arrived in Jackson. Fr. John had been appointed the permanent pastor to the St. Mary’s Parish by His Eminence Archbishop PETER of the Diocese of New York and New Jersey. Parishioners greeted Father John and Matushka very warmly and the Prokopiuk family settled into their Parish home.

With the arrival of Father John as Rector of St. Mary’s Church, parish life was greatly revived. Church services were celebrated regularly as well as the many other services that contribute to Church life: weddings, baptisms, and funerals. The Parish Sisterhood established the social tradition of “coffee hour” after the Sunday Liturgy.

In time a new Church Council was elected with Paul Dwaresky as its President. During this period, important work began on writing and adopting the Parish Statutes, which were based on the Statutes of the Orthodox Church of America. The Annual Parish meeting adopted the new Parish Statutes which were subsequently by the Ruling Archbishop PETER. This action provided a strong administrative foundation for the future life of the Parish.

The miniature yet exquisite St. Mary’s Church is situated on a small hilltop surrounded by a multitude of famous and historic departed Russian personalities. Next to the church is the grave of His Eminence Archbishop DIMITRY (Magan), next to him is the grave of the Supreme Commander of the White Armies who fought against communists, General Anton I. Denikin. (His body was recently transferred to Russia). Also by the Church is the grave of the Russian Composer Alexander Gretchaninoff, who often hears his own church compositions sung by St. Mary’s choir under the direction of Janet Machyowsky. One can also find the graves of the world renowned Cossack Choir conductor, Sergei Jaroff and the Don Ataman, Peter Popoff. Near the Church there are also many graves of the well known clergy: Protopresbyter Nicholas Perechvalski, Archpriest Leonid Ladinsky, Archpriest Tikhon Mishevsky, Archpriest Fedor Gorb, Archpriest Theodore Zajchenko, Archimandrite Julian Trotzky, Archpriest John Turkevich, Archpriest Constantine Buketoff, Protodeacon Nicholas and Matushka Maria Kuzmin-Polansky, Archpriest Peter Popoff, the first Rector of the St. Mary’s Parish, Archpriest Konstantin Kaminsky and many others well known personalities.

In the Church there are three Memorial Boards with the names inscribed of all the departed that have been buried in the cemetery. Father John remembers the names of the departed during Great Lent, on all Memorial Saturdays and, in general, throughout the year during the Divine Liturgy. For the past eleven years our Parish is very happy to have His Eminence Retired Archbishop GREGORY (Afonsky) serving and beautifying our Divine Services. As the Parish grew, Protodeacon John Morvay and Deacon John Suchernick were attached to the St. Mary’s Church to assist Father John.

In 2003 at the Annual Church Meeting, Father John and the Church Council recommended undertaking a great renovation project for St. Mary’s Church. The project would include necessary structural repairs and aesthetic changes. Once the project was approved, the collection of funds began. The response by our Parishioners, Friends and Benefactors was tremendous.

Since 2003 a new roof was installed and adorned with three new golden cupolas. The exterior of the church was resurfaced and fresh paint was applied, new heating and air conditioning systems, hard-wood flooring, and new electrical systems were installed. A beautiful chandelier is a lovely addition to the sanctuary. New entrance steps were constructed and the mosaic Icon of the Vladimir Mother of God adorns the Church entrance.

In order to continue the Second Phase of the renovation project the Parish had sent Father John, Matushka Ludmila and Christina Machyowsky to Moscow and Sofrino to purchase a new Iconostasis, Altar Table (Prestol), Tabernacle, Oblation Table (Zhertvennik), new Banners, a Seven Light Candelabra, and exquisite Lampadas for the Iconostasis and the Memorial Boards. Also many other church articles were purchased necessary for celebrating the Divine Services.

The entire Parish of St. Mary’s Church joins in giving thanks and praise to Our Lord Jesus Christ and the Holy Theotokos for sending so many good and generous people to help us with our great project. We extend our deep gratitude to our dear Parishioners, Benefactors and Friends who were so kind and benevolent in helping us to beautify and rededicate our most beloved St. Mary’s Church to the Glory of God.